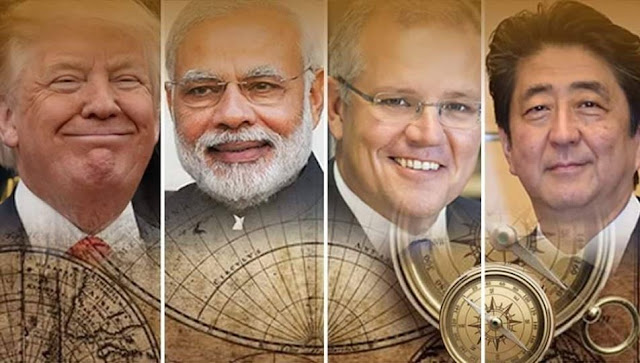 Why is China looking aggressive .. Why are Nepal and Pakistan walking on the Chinese line… What is India doing… or is it doing anything? All the action between India and China is going on only in Ladakh / Sikkim … Have all the news channels showing news for 24 hours all day have not been able to give any clarity on this issue for 2 weeks.
In our media discussions, making news of Australia’s Prime Minister is the news … and it becomes a piece of formal news that India Australia talked about increasing mutual cooperation.
To understand what is going on around us right now, we have to understand “QUAD”.
QUAD is the quadrilateral alliance of ‘India, Australia, America, and Japan’.
Actually, the story started a decade ago when there was talk of forming the organization of these four countries. At that time it was said that Australia had to take back its steps under Chinese pressure and we also had Manmohan Singh as Prime Minister who was in favor of a shared vision with China… then it was done… and China was planning its OROB project. With the help of his Ashwamedh Yajna, he was going to win the world smoothly. But the visionary leaders of America and Japan were understanding that this matter is going to emerge as a big threat in the future.
In 2017, the Prime Minister once again dared to propose to bring the four countries together… This time there was Narendra Modi in India… Trump in America… and Australia had also made up their mind that in the Indo Pacific region China cannot be given a free pass. The QUAD that should have stood up a decade ago started turning into reality in 2017.
The main reason for forming a quadrilateral alliance is ‘One Belt One Road’ by China which aims to build the largest economic platform in the world of China Dominated. Through which China dreamed of becoming a global superpower.
The problem with China is that its dictatorial attitude that runs on internal issues of its country, it wants to run it all over the world too. That is why China does not take care of the sovereignty of other countries in its ambition. On the other hand, the lack of any power capable of stopping China was also being filled with overconfidence.
After the formation of this QUAD group, it is not that China has weakened. It is an economic power, it is a fact, it is a powerful one, it is also a truth .. When our governments were asleep and indulged in corruption then China had already surrounded us through the String of Pearls. Currently, the horse of China Ashwamedh Yagya had successfully left us without any change and we and you were busy watching IPL and Bollywood cocktails and comedy of Pakistani artist artists, ghazals of singers on reality TV. Were. The entire system was a curtain that everything is correct.
While on the other side:
In the light of these facts, when you see the friendship of Trump-Modi … you will understand the dialogue of Japan-India … If you see the photo of Samosa by the Prime Minister of Australia, then you will understand why China jumped in Doklam only in 2017 because, In 2017, QUAD stood again … North Korea fired missiles at Japan on whose instigation … Who is instigating Nepal against India … Why Pakistan is behaving like China’s pet crazy dog ​​…
Narendra Modi is the Prime Minister of the country. As long as we keep the unity firmly together, we have a chance in this fight .. Otherwise, the way the Breaking India Force is engaged with us, our internal trust like America is broken as soon as our mutual trust is broken. Things are going to happen here too.
We do not mean to say that we are going to fight with China tomorrow itself … to say that China is setting its fielding … We have to do our own … and in future China or any other country If there is any misunderstanding, then we should remain strong to clear his misconception.
Till now, we were going to come back after being pushed in the fight… From here we have fabricated our feet… Now just to move forward… and to go on staring… and in this battle we have only one Must be identified … “Indian”.
#India #Quad #China #Trump #Modi #Australia #Japan
If you do not understand my given information,then you can ask me your question in the comment box, I will answer your questions as soon as possible.